On the bone-chilling streets of Paris yesterday some Tibetans and their supporters could be forgiven thinking that they were witnessing a momentous change of policy by the Central Tibetan Administration as Doctor Lobsang Sangay peppered his keynote speech with references to liberty, justice. and democracy. The Harvard law school graduate began his address by envisioning raising the national flag of Tibet above the Potala Palace in Lhasa, Tibet’s symbol of nationhood and independence was a prominent feature of the event, and formed a huge stage backdrop. Yet this is the man who had boldly declared that he is not asking for democratic rights within an autonomous Tibet!

Unfortunately a careful examination of his words reveals not so much a demand from Doctor Sangay and his CTA colleagues for a free and democratic Tibet, but a cynical  misappropriation of the rights and political aspirations of Tibetans inside Tibet. When mentioning such freedoms he very carefully avoided officially endorsing the demands made by compatriots under Chinese tyranny. Indeed his speech on referencing ‘liberty’ or ‘democracy’ emphasized repeatedly that such objectives were what ‘Tibetans’ wanted with the obvious corollary that such aims were not being demanded by the Central Tibetan Adminstration. This is evidenced by the policy adopted and promoted by Lobsang Sangay and his colleagues within the CTA which is actively seeking a condition of ‘meaningful autonomy’ for Tibetans. In that objective Doctor Sangay has stated that no separation from China is being sought but only the just and full application of communist Chinese laws on autonomy’ In that context he made it clear during a 2013 interview, given at Washington’s Council on Foreign Relations that as part of  his autonomy proposals democracy was not being sought for Tibetans in Tibet!

Now given that’s the agreed and formalized policy of the Central Tibetan Administration clearly notions of national freedom and independence are effectively anathema to Lobsang Sangay,  marginalized, ignored and rejected as barriers to progressing talks with a Chinese regime ever suspicious of covert agendas. On March 13 China again dismissed any prospect of talks on what is called ‘high autonomy’ for Tibetans. Meanwhile the officially sanctioned ideology that autonomy is the only ‘realistic’ solution continues to forced upon a Tibetan Diaspora. However in trying to prevent Tibetans from expressing their support for a free and independent Tibet the thought-police of the CTA have gone too far and unleashed a wave of outrage and opposition.

The intensity and scale of unease at the manipulation of protests in New York and Dharamsala has revealed just how embedded within Tibetan communities globally is support for Tibetan national freedom. The very same Tibetans who Lobsang Sangay and his Administration require the goodwill and political support of, which brings us back to possible motive for his flag waving address in Paris. Some Tibetans on various social media sites are already posting glowing comments of support for his speech describing it as ‘powerful’ and ‘strong’ yet they clearly have been fooled by appearance and failed to note the detail of his comments.

What was declared in Paris was not an approval of, or expression showing solidarity with the cause and rightful demands of Tibetan in Tibet but a carefully engineered and duplicitous display that was more concerned with promoting Lobsang Sangay and presenting an illusion that the Central Tibetan Administration is allied with and shares the objective of national liberation so courageously expressed by Tibetans under China’s genocidal rule. Don’t be fooled people! 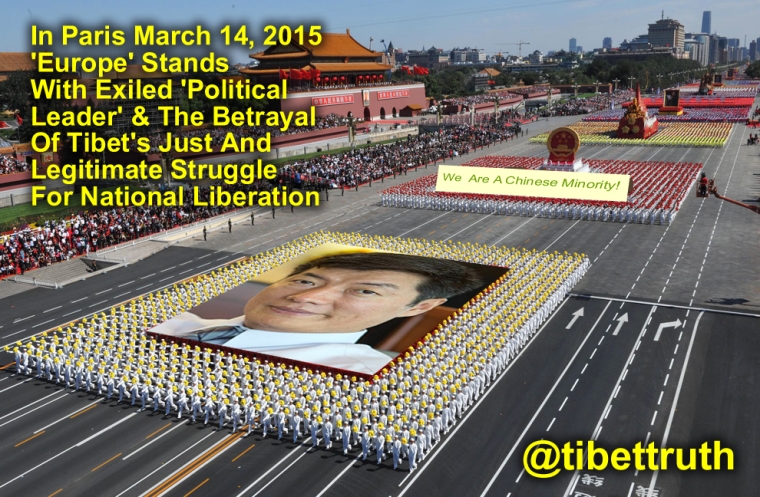 Paris, France on March 14 is to host an event titled ‘Europe Stands With Tibet’ sounds like a gathering that’s in solidarity with the Tibetan people, right? Wrong! This rally should be more correctly termed ‘A Platform To Promote The Surrender Of Tibet’s Right To Nationhood’ Why so? Well take into account that its been organized and promoted by the Central Tibetan Administration and will feature as main speaker Doctor Lobsang Sangay who will be peddling his message of autonomy under Chinese rule, in the hope of appeasing China.

As with recent Tibetan demonstrations in New York and Dharamsala it is likely that the issue of Tibetan independence will not be welcome, at what we understand is to be tightly restricted and orchestrated meeting. Tibetan communities are being bused across Europe to attend and ensure that this propaganda theater has a compliant and obedient audience. No doubt Tibetan flags will be tolerated but that will be a distraction, the central message will be that ‘We are only seeking genuine autonomy’ a condition if ever realized under the brutal oppression of the Chinese regime will not be allowing any degree of Tibetan national identity and certainly will arrest, torture and shoot anyone who dares to raise Tibet’s national banner.

Don’t be mislead either should you read of or hear the cynical use of the term ‘freedom’ by the Harvard trained lawyer. While it sounds suggestive of independence it’s used by Lobsang Sangay as it may exist under the various forms of ‘autonomy’, for anyone who doubts such an assessment we refer you to an interview Video Here  in which he made clear that his proposals on resolving the issue of Tibet ruled out the prospect of democratic rights for Tibetans in Tibet!

This is an individual who while cloaking himself in the Tibetan flag and delivering carefully scripted rhetoric designed to appeal to and manipulate the exiled Tibetan community, is opposed to Tibetan independence and has willfully ignored the demands and political aspirations of Tibetans inside occupied Tibet.

If anyone reading this truly wishes to stand with the Tibetan people they will not be doing so by attending this event in Paris, better to show your solidarity with the peaceful resistance being waged by Tibetans in Tibet, join and get active with those organizations who clearly state an objective of national liberation and independence for Tibet. 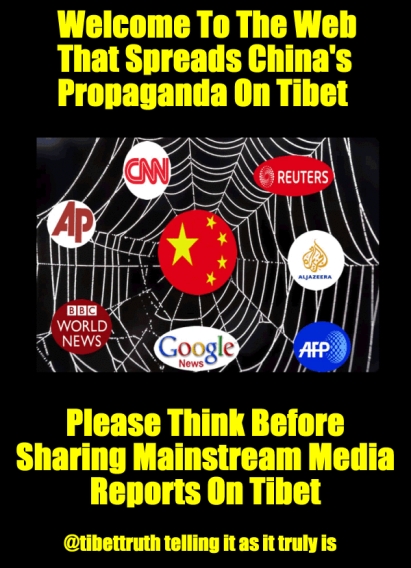 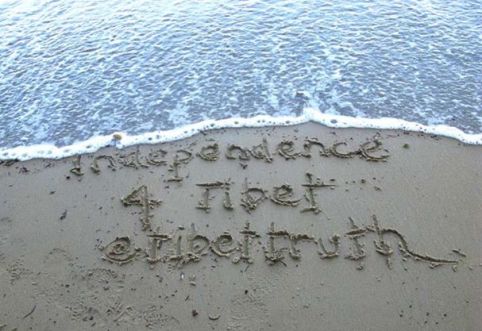