With Ms Tsewang Dolma, one of three Tibetan Youth Congress activists on hunger-strike having earlier today been taken to hospital, the protest continues to demand action on Tibet from the United Nations. Yesterday the Regional Tibetan Youth Congress Wisconsin launched a campaign to phone bomb (September 30) the UN with the demands being pressed by the #TYC3.

1. Urge the United Nations to raise the issue of Tibet at its General Assembly and Human Rights Council Session.

2. Urge China to address the demands of the Self Immolations in Tibet.

3. Urge China to give evidence that the 11th Panchen Lama Gendun Choekyi Nyima is alive.

5. Urge China to release all political prisoners.
Anyone wishing to telephone their support please call:

A video statement supporting the Tibetan hunger-strike currently on its seventeenth day, taking place in Delhi, India has today been released by ‘Operation Tibet’ an anonymous activist’s collective. The group has been targeting Chinese government websites as an action of solidarity with Tibetan Youth Congress demands for intervention on Tibet  from the United Nations. Thanks to @AnonymousTibet for sharing news of this release.

The Tibetan Youth Congress has today launched an indefinite hunger strike in protest at China’s oppression of Tibet and to demand action from the United Nations. Three of its Executives, Tenzin Wangchuk, Tamding Hrichoe and Ms Tsewang Dolma are staging their action at at Jantar Mantar in Delhi the capital of India.

Subscribers to our Blog may recall similar demands made by courageous Tibetans to the United Nations, including a hunger-strike outside the very doors of the UN’s New York headquarters. That protest resulted in a number of assurances being made by officials to Tibetans, although the follow-up and subsequent action was woefully absent. it is hoped that the Tibetan Youth Congress will be as determined as ever to ensure that any assurances offered by UN officials are not simply empty gestures.

There’s wealth of questions and arguments regarding the ethics of self-harm, as applying to political protest, yet actions such as self-immolation or a hunger-strike remain a powerful individual expression and whatever the moral aspects of such protest, demand to be respected and responded to with understanding and awareness. Unfortunately the politics of the state often tramples over such considerations to realize short-term aims in bringing an end to such actions, take the troubling case of Irish political prisoners under the tender care of British rule being forcibly fed via stomach pumps!

Well looks like history is set to repeat itself, as on September 22 India sent in the police to close down the Tibetan hunger-strike, that has for twenty days been taking place in New Delhi in protest at the indifference of the United Nations and European Union to the plight of the Tibetan people under China’s tyranny. Clearly the courageous efforts of the three Tibetan involved and the global attention it attracted has become something of a political difficulty and the order was given to shut it down.

The scenes which took place today were deeply troubling and distressing, Tibetans who have for nearly a month denied themselves food, exhausted and in pain roughly man-handled by policemen who showed not an ounce of respect or consideration for the condition or peaceful action of these brave Tibetans.

Witnessing events, which seemed to take place in slow-motion was very difficult, even writing this brings tears flowing, recalling the efforts of the hunger-strikers to resist arrest, utterly drained yet still crying out to be allowed to continue their action. It was heartbreaking to see such patriotism and courage. There was also anger in being informed that the Indian authorities, in a gross violation of individual rights, then forcibly injected the Tibetans with glucose solutions, clearly desperate to prevent any loss of life not in terms of compassion or medical grounds (the excuse released by the authorities) but as a political response. No doubt the bloody tyrants of Beijing would be most pleased with the odious behavior of the Indian police. 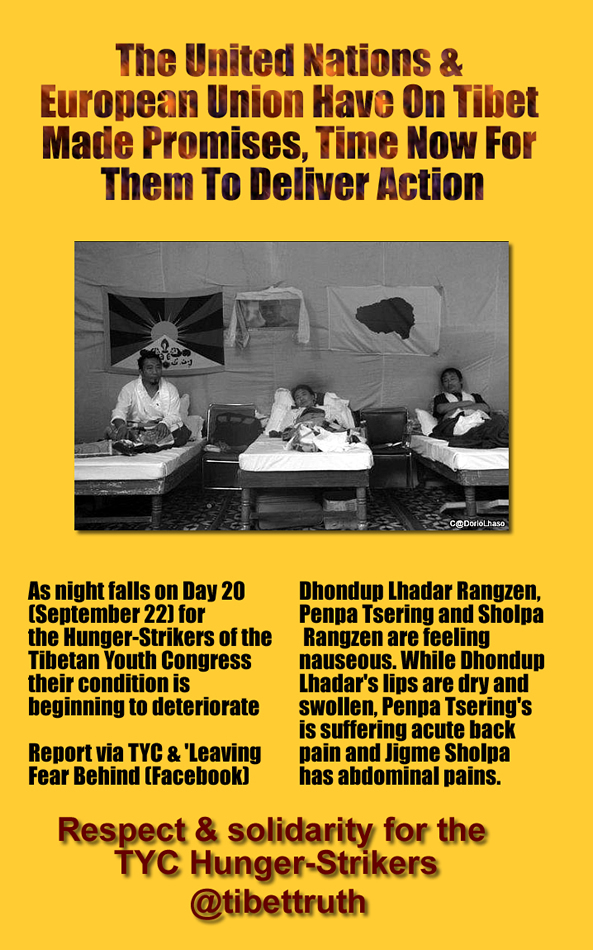 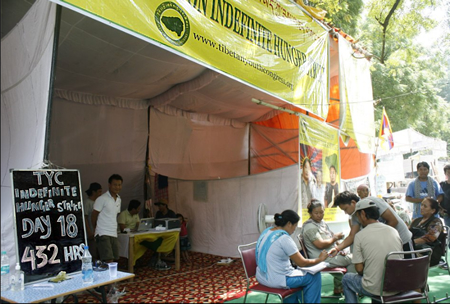 Photo-Diary Of Day 18 At TYC Hunger-Strike 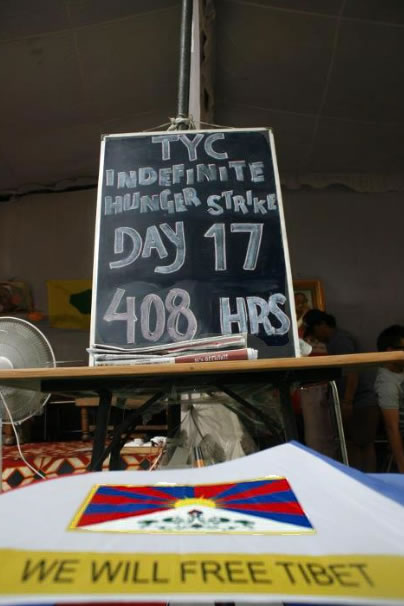 According to a report by Phayul following a state ordered medical examination of the three Tibetan hunger-strikers Indian authorities have issued an decree demanding an end to the action, citing medical concerns, although political considerations are no doubt at work behind the scenes. The Tibetan Youth Congress has expressed its determination to continue the protest, despite this latest development. Full Report Here